These are my notes for my talk at the 2021 edition of the May Institute in Computation and statistics for mass spectrometry and proteomics.

I would like to start by thanking the May Institute organisers for the invitation, and for organising such an event. The reasons why I think their efforts are so valuable should become apparent below. For now, suffice to say that I believe that it is essential for researchers to be able to question their data without constrains - and we need the tools and the skills to be able to do that. The May Institute is one place where we can acquire or improve these skills.

Where is the scholarship?

An article about computational science in a scientific publication is not the scholarship itself, it is merely advertising of the scholarship. The actual scholarship is the complete software development environment and that complete set of instructions that generated the figures.

[Buckheit and Donoho 1995, after Claerbout]

Why reproducibility is important

It’s not about reprodcible research.

It’s not about open research.

It’s about reliable research! It’s about trust – openness and reproducibility are means that (should) lead to greater trust in the data, analyses and results.

Is there a cost?

Well, yes, probably … there’s no such thing as a free lunch.

Actually no, it is a matter or relocating time! 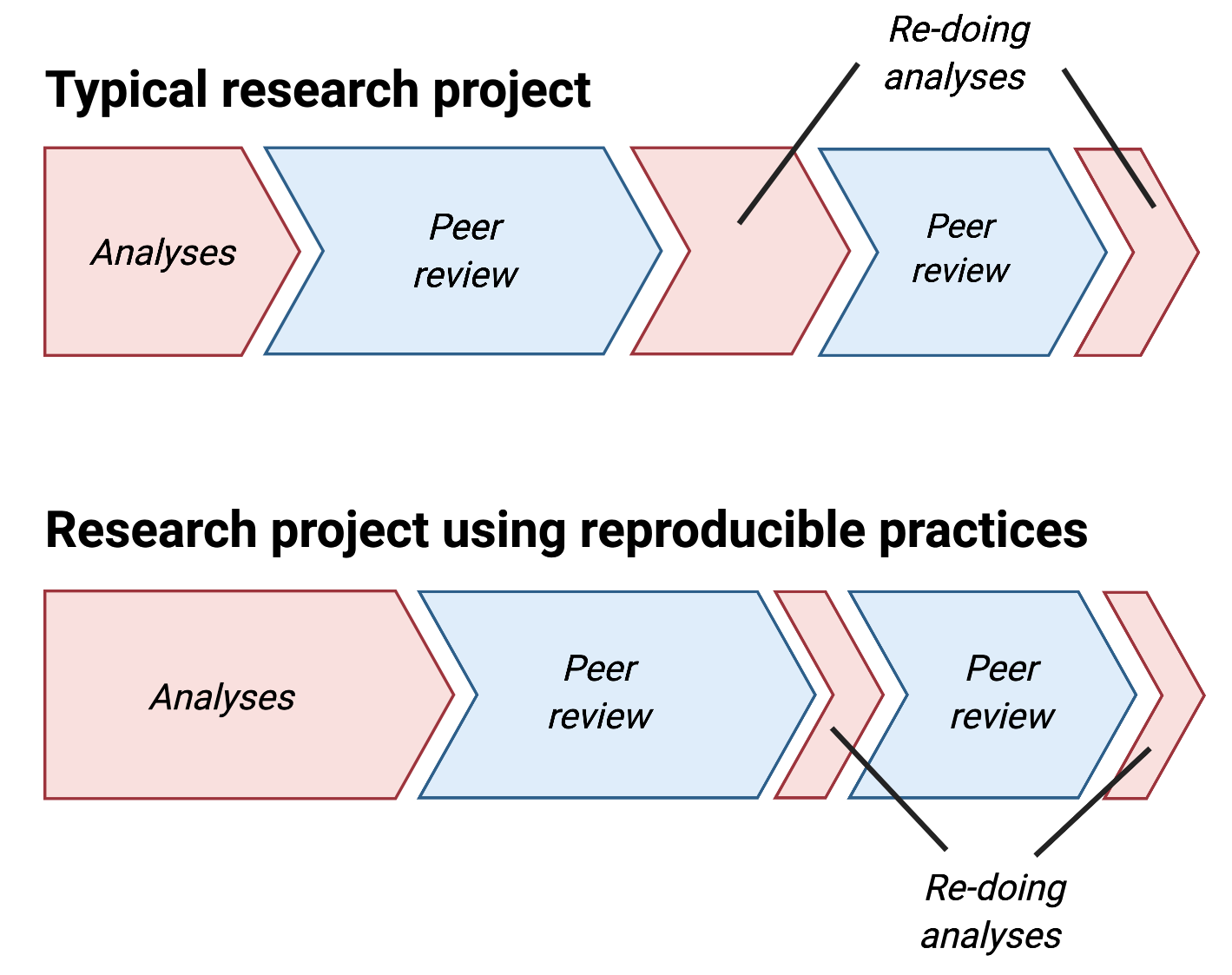 From Five things about open and reproducible science that every early career researcher should know.

But what do we mean by reproducibility?

From a But what to we mean by reproducibility? blog post.

Another view (from a talk by Kirstie Whitaker):

Whether you want to

in my opinion, it all boils down to understanding what has been done and what is happening.

I am not (that much) interested in blindly re-running something to confirm that I can the same results without understanding it. However, it is important to acknowledge that even simply repeating or reproducing a complex analysis isn’t trivial - especially for very large data, large compute requirement, dedicate hardware, long simulation times, …

Note that sometimes, things are expected not the reproduce, for example when bugs are fixed, analysis methods are changed/improved. This brings us back to the importance of understanding what we do and why we do it.

Why reproducibility is important (as an individual researcher)

Gabriel Becker An Imperfect Guide to Imperfect Reproducibility, May Institute for Computational Proteomics, 2019.

(Computational) Reproducibility Is Not The Point

The goal is trust, verification and guarantees:

And so, my fellow scientists: ask not what you can do for reproducibility; ask what reproducibility can do for you! Here, I present five reasons why working reproducibly pays off in the long run and is in the self-interest of every ambitious, career-oriented scientist.

Here (i.e. as part of the May Institute), I took the decision to let you install the packages on your computers. Many of you will have taken the R classes, so you should have a working installation and good to go.

Another approach could have been to prepare Docker container or Amazon Machine Image with all pre-installed software and data (Bioconductor provides Docker containers and AMIs). Bioconductor uses the Orchestra platform for conference workshops. I use the Renku environment for my university teaching. After installing docker on your computer or running an pre-configured online environment, you would simply download and run that container. This is particularly relevant for complex installations.

In my experience, the installation of R and R/Bioconductor packages is relatively straighforward (and a useful experience) to be done by hand by researchers that want to analyse their own data.

The R for Mass Spectrometry initiative The aim of the R for Mass Spectrometry initiative is to provide efficient, thoroughly documented, tested and flexible R software for the analysis and interpretation of high throughput mass spectrometry assays, including proteomics and metabolomics experiments. The project formalises the longtime collaborative development efforts of its core members under the R for Mass Spectrometry organisation to facilitate dissemination and accessibility of their work.

The code is available here.

How to Manage Data: Data Stewardship and FAIR Skills

In this interactive talk at the Hong Kong University of Science and Technology Research Data Management Symposium 2021, Laurent Gatto and Marta Teperek will ...

How to succeed in my exam

This short post describes how to succeed and how to fail in answering a typical exam question in one of my bachelor courses. I even believe it is applicable ...

Open and reproducible management and dissemination of knowledge

This post is part of my application for the Circle U chair at the UCLouvain. The seven partners of Circle U set up a chair programme to ensure strong and sus...

Becoming a better scientist with open and reproducible research (2)

This is an modified version of the Becoming a better scientist with open and reproducible research talk that I gave at TU Delft in May 2019. This version was...