Earlier today, I attended an information session about Open Data presented by Marta Teperek from the Research data management team (@CamOpenData) at the University of Cambridge. 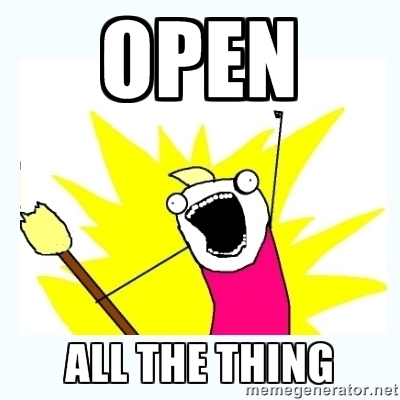 Marta talked about the EPSRC open data policy. These policies are currently the strictest among the UK research councils and it is expected that other research councils will align their requirements to the EPSRC. Other than the respective funding bodies sites, useful links to learn about these policies are the Research Data Management and the sherpa/juliet sites. The Cambridge Open Access initiative was also mentioned, and how they support researcher in publishing their work under an open access license. Marta also described the DMPonline, a tool that assists researchers to produce an effective data management plan. We were also informed that the University provided a data repository that would store any reasonable sized data for a (reasonable, I think) cost of £5/GB. This is a one-off payments to store the data according to funders regulations, i.e. 10 years since the last access (which means that of somebody accesses your data after 9 years and 11 months, the timer is set to zero for another 10 years again). Marta made it however very clear that this was certainly not meant to replace well established academic domain-specific data repositories. During the question session, open source software was mentioned and I was very happy to hear that Marta advised to get in touch with the Software Sustainability Institute.

For more details, see the slides (licensed under CC-BY-SA).

The information that was communicated was very relevant and spot on, as reflected by from the interest and questions from the audience. In the future, I would however like to see the promotion of open data and open access for their own benefits, rather than as a result of funders policies, i.e. develop a bottom-up culture of Openness rather than a top-down approach. For that, it would be great to involve some key persons in the Open data/access/research communities, such as Erin McKiernan, Ross Mounce, Mike Taylor or Peter Murray-Rust (who is local, by the way) and many others. These people are in a position to inspire researchers, especially younger ones. I also think that it would be beneficial to involve researcher that are active in the open data and data sharing trenches in these more formal local open data initiatives and to provide a domain-specific as well as more technical input.

@lgatt0 @CamOpenData Lots of ways TBH. We should put together some guidance. Watch this space!

In general, while I certainly support the Research data management initiative, I think open data/resarch/access should be a community-wide effort and the main actors should be involved as much as possible.

I would like to conclude with the following suggestion. If the emphasis of openness in scholar activities should primarily be the inherent benefits and moral value of openness in research and education (rather than compliance to policies), there really should be an effort to educate students in open scholarship. When will there be open scholarship course in our Universities’ curricula?