This blog post summarises the notes for my talk at the Are you ready for publishing reproducible research? meeting at the TU Delft on the 16 May 2019. The slides are available here.

This material is available under CC-BY, unless otherwise stated.

The original title of the talk was Being a better scientist with open and reproducible research, but I feel that this is some one constantly aims for, hence the change to becoming one.

Disclaimer: I do not speak from authority1. I speak of personal experience. My experience is in computational biology, bioinformatics and high throughput biology data. My experience doesn’t directly translate to other fields or domains (for example when it comes to data privacy) or even to other personalities in the same field.

Open research and reproducible research aren’t the same thing, and one doesn’t imply the other. They are historically also very different.

From a technical point of view:

From a philosophical point of view:

There isn’t only one type of open science

Open science has seen a continuous evolution since the 17th century, with the advent of dissemination of research in scientific journals and the societal demand to access scientific knowledge at large. Technology and communication has further accelerated this evolution, and put it in the spot light among researchers and academics (for for examples funder mandates) and more widely in the press with the cost of publications (see for example this Guardian long read article Is the staggeringly profitable business of scientific publishing bad for science? or the Paywall movie).

Open science/research is the process of transparent dissemination and access to knowledge, that can be applied to various scientific practices (image below from Wikipedia):

Open science/research can mean different things to different people, in particular when declined it along its many technical and philosophical attributes.

How to be an open scientist:

Let’s be open and understanding of different situations and constraints.

Why becoming an open research practitioners

It’s the right thing to do. See the The Mertonian norms… Or is it?

Benefits for your academic career: some examples from the Open as a career boost paragraph:

Networking opportunities (I’m here thanks to my open research activities with my former colleague Marta Teperek at the University of Cambridge, UK).

But are there any risks?

Does it take more time to work openly?

Isn’t it worth investing time is managing data in a way that others (including future self) can find and understand it? That’s, IMHO, particularly important from a group leader’s perspective, where I want to build a corpus of data/software/research that other lab members can find, mine and re-use.

Is there a risk of being scooped?

There certainly is a benefit if releasing one’s research early!

But, importantly, working with open and reproducible research in mind doesn’t mean releasing everything prematurely, it means

So, are there any risks?

Why reproducibility is important

But what do we mean by reproducibility?

From a But what to we mean by reproducibility? blog post.

Another view (from a talk by Kirstie Whitaker):

Gabriel Becker An Imperfect Guide to Imperfect Reproducibility, May Institute for Computational Proteomics, 2019.

(Computational) Reproducibility Is Not The Point

The goal is trust, verification and guarantees:

Why becoming a reproducible research practitioners

And so, my fellow scientists: ask not what you can do for reproducibility; ask what reproducibility can do for you! Here, I present five reasons why working reproducibly pays off in the long run and is in the self-interest of every ambitious, career-oriented scientist.

What can you do to improve trust in (your) research?

Includes (but not limited to)

Preprints are the best!

This section is based on my The role of peer-reviewers in promoting open science talk.

As an open researcher, I think it is important to apply and promote the importance of data and good data management on a day-to-day basis (see for example Marta Teperek’s 2017 Data Management: Why would I bother? slides), but also to express this ethic in our academic capacity, such as peer review. My responsibility as a reviewer is to

I don’t see novelty, relevance, news-worthiness as my business as a reviewer. These factors are not the prime qualities of thorough research, but rather characteristics of flashy news.

Here are some aspects that are easy enough to check, and go a long way to verify the availability and validity and of the data

Make sure that the data adhere to the FAIR principles:

Findable and Accessible and Interoperable and Reusable

Note that SI are not FAIR, not discoverable, not structured, voluntary, used to bury stuff. A personal web page is likely to disappear in the near future.

As a quick note, my ideal review system would be one where

When talking about open research and peer review, one logical extension is open peer review.

While I personally value open peer review and practice it when possible, it can be a difficult issue for ECRs, exposing them unnecessarily when reviewing work from prominent peers. It also can reinforce an already unwelcoming environment for underrepresented minorities. See more about this in the Inclusivity: open science and open science section below.

Define you data collection and analysis protocol in advance. Get it reviewed and, if accepted, get right to publish once data have been collected and analysed, irrespective of the (positive or negative) result.

This is very important!

Open research can lead to collaborative research. The development of MSnbase is an example I am very proud of.

The credit goes to the outstanding contributions and contributors!

Collaborative work and cooperation is certainly one important concept that gravitates around open science/research (see the Mertonian norm of communism), but that isn’t necessary nor sufficient for open science.

Build openness at the core your research

(according to you possibilities)

Open and reproducible research doesn’t work if it’s an afterthought.

Some examples of my own research 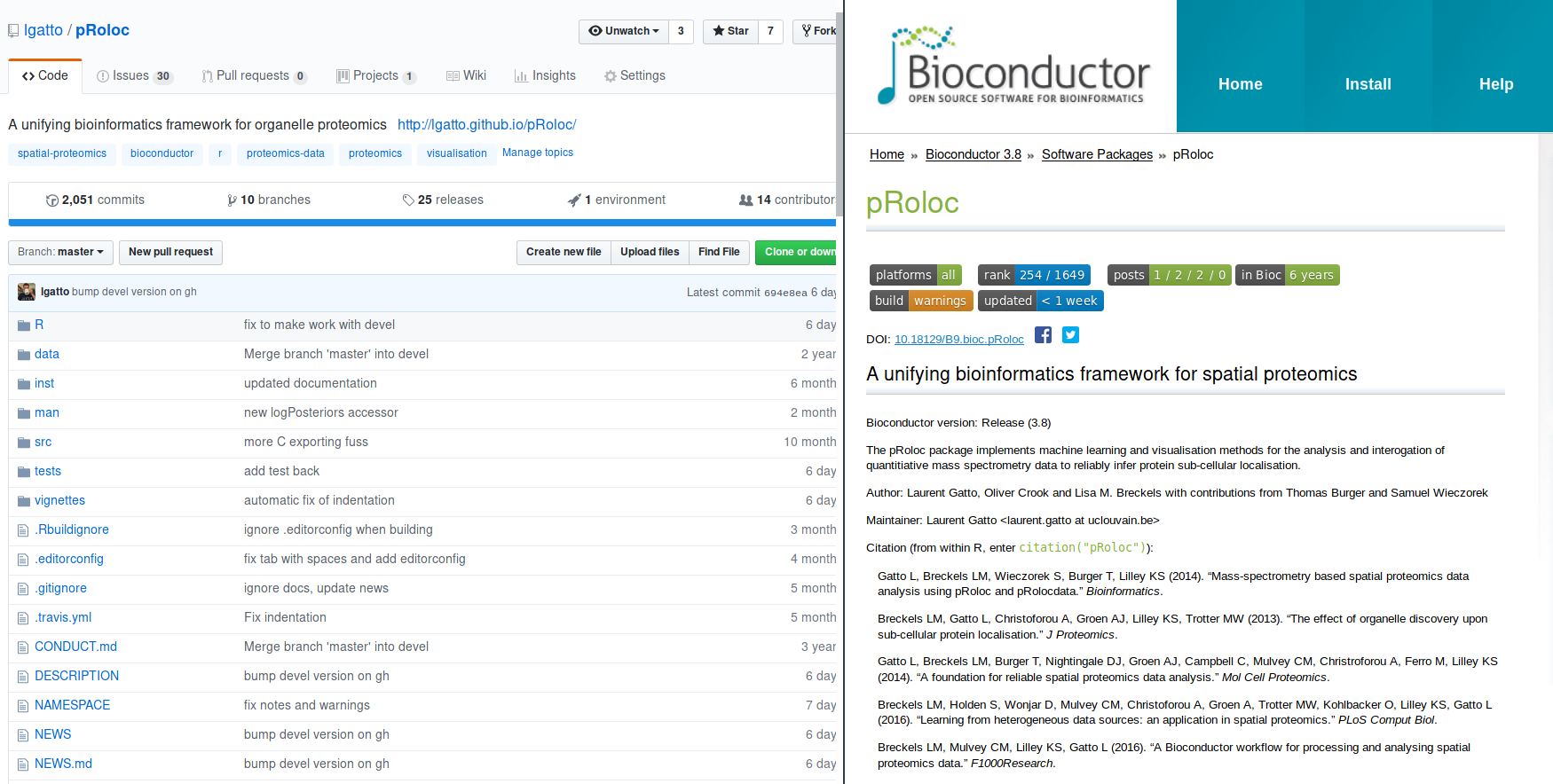 SpatialMap is a project aiming at producing a visualisation and data sharing platform for spatial proteomics. I decided to promote and drive it as openly as possible in the frame of the Open Research Pilot Project. The ORPP is a joint project by the Office of Scholarly Communication at the University of Cambridge and the Wellcome Trust Open research team. Here are the reasons why the SpatialMap project is an open project:

Note that I do not have any dedicated funding for this project. The progress so far was the result of a masters student visiting my group, and is currently not actively developed anymore.

Open Science as in widely disseminated and openly accessible

Open Science as in inclusive and welcoming

It was a damned hard community to break into. Any step I took to be more open, I felt attacked for not doing enough/doing it right.

As far as I was concerned for a long time (until June 2017 to be accurate - this section is based this Open science and open science post), the former more technical definition was always what I was focusing on, and the second community-level aspect of openness was, somehow, implicit from the former, but that’s clearly not the case.

Even if there are efforts to promote diversity, under-represented minorities (URM) don’t necessarily feel included. When it comes to open science/research URMs can be further discriminated against by greater exposure or, can’t always afford to be vocal.

Standing on the shoulders of giants only really makes sense in the context of open and reproducible research.

One of my advice was to make allies. I have been lucky to meet wonderful allies and inspiring friends along the path towards open and reproducible research that works for me. Among these, I would like to highlight Corina Logan, Stephen Eglen, Marta Teperek, Kirstie Whitaker, Chris Hartgenink, Naomie Penfold, Yvonne Nobis.